The boy lingers on the cliff, arms wrapped around his shirtless middle, while the other boys leap and fall into the lake below. Made of stone, but draped in skin so no one knows, they fall hard and fast, sending water skyward. The boy knows they are made of stone. He knows because his insides aren’t made of stone but of ribbon: a twirling, delicate thing. He doesn’t want to jump, sure that he will drift to the water’s surface instead of plummet like everyone else, like he should.

Another boy stands off to side, wearing a cast on his forearm. Behind him a path meanders down to the water’s edge. The boys of stone often make fun of the boy with the cast because he’s breakable, not shatterproof like they are. There’s a sharpness to this boy, a gleam, and the boy made of ribbons guesses the breakable boy is composed of glass. He has no way to know for sure; they could never speak of such things.

The boy of glass sees the boy of ribbon watching him and gestures to the path. We could just walk down, he says. We don’t have to jump and let them see how we don’t fall like they do. He scoots to the edge and glances over at the water, only to hurriedly step away.

The boy of ribbon wants to go down the path, to keep himself hidden from the others, at least for a while longer, but realizes if the boy of glass knows he is different the other boys might as well. And he has no way out, to walk down the path is an announcement, the same as jumping and drifting down, the same as walking away from the cliff entirely. The others will see him no matter what he chooses.

Once, when he was younger his father bought him a Bearded Dragon and put it in a terrarium. The boy felt bad for the lizard because, though it looked like it could scamper wherever it wanted, it was actually trapped—its freedom an illusion. Walls you can see through are still walls. His father gave him crickets to feed the Bearded Dragon but the boy didn’t want to have a hand in killing the crickets. They were so small and shiny black like the space between stars. But the boy’s father said, if you don’t feed the lizard it will die. It’s one or the other. You can’t have it both ways. That was the first time the boy felt his ribbon coil and knot.

Now, he feels the same, his ribbon tightening and twisting into a nodule, so if he presses hard into his stomach he can feel it—a subdermal marker of this and other similar moments. He drops his hands to his sides as he sees the boy of glass watching, embarrassed to be caught fondling his own pain.

And maybe it is this embarrassment that causes him to run and leap, more afraid of what the boy of glass saw than of what the others might see. He flies through the air, focused on falling, so he doesn’t see the look on the boy’s face who now stands alone on the cliff’s edge. He doesn’t see the boy walk away, bits cracking and hardening all at the same time. He might wonder about him later, but once he hits the surface it’s all bubbles and cold water, icier than he’d imagined.

He sinks down and down until his feet touch the murky bottom. Around him, boys strain for the surface, kicking and floundering. But they aren’t made for rising, though their thrashing creates tiny perfect bubbles that stream upward and escape them. The boy doesn’t pity them.

He swims away until he sees a rock on the bottom, slick with algae, that looks like his old Bearded Dragon. He tries to pick it up, but it is sharp underneath—a ragged and unexpected edge—and it cuts his palm. As he swims to the surface, blood seeps from him, lacing back through the water like a tether. Before he breaks through, he stops and treads and looks, but he doesn’t see any nodules in the ribbon of blood behind him. 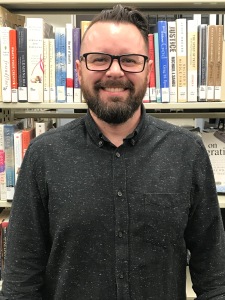 Evan James Sheldon‘s work has appeared recently in the American Literary Review, Cincinnati Review, and Maine Review, among other journals. He is a Senior Editor for F(r)iction and the Editorial Director for Brink Literacy Project. You can find him online at evanjamessheldon.com.